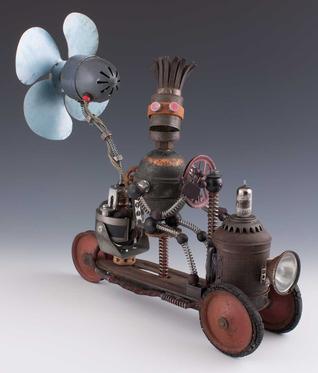 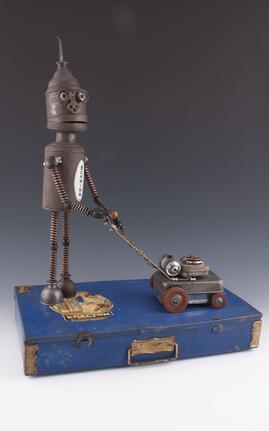 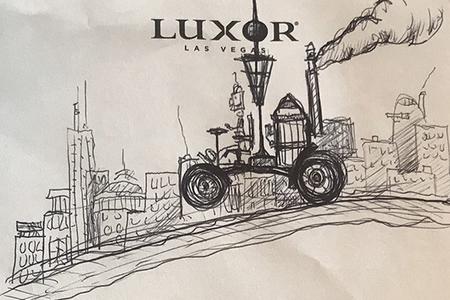 I am often asked if the inspiration of my Bots comes from an idea I already have or if I find something that then inspires a piece.  The answer is actually both.    Scrounging around for cool items I often come upon something that suggests a Bot to me.  Some cool items go on the shelf so when I get an idea for a particular Bot I can start matching up items.  As I am searching thru flea markets and crusty old antique barns a 1960s rotisserie has got to become a large Bot with a fish tank inside his belly.  Or a feather duster needs to become a crazy haired Lady Bot.  Flip side to that, if I am working on a theme inspired Bot and need just the right body part I might remember that I have that cool old lamp on the shelf.

Ford Bot is example of both found item inspiration and nicely matching inventory.

I found an old three wheeled roller skate in an antique barn in the back corner of a cluttered booth and knew right away I wanted to use it to create a vehicle of some kind.  It was missing one of its rubber wheels and its matching roller skate but was the right size and had the perfect wear and tear.

Some Bots pop right into my mind fully baked and ready to be built but Ford took some cooking time.   I knew I wanted to build a vehicle from the Bots steam engine era.   I started imagining a Bot motoring around Bot town with his steam boiler powered contraption and came up with the following initial sketch while traveling for business at a trade show.

Back at the shop I fleshed out the boiler, seat and steering nicely but needed just the right body.  I had a strange round piece that must have been from a lamp that was perfect for a body.  The vehicle was long and skinny, so I wanted a contrasting body type and orb it was.   The propulsion system needed to be a mix of old timey steam boiler and some type of electrical system that only Bots can understand.  And I wanted the engine to be very visible.   For that I gutted a fan and pulled the motor out and mounted it to the back with old phone cords suggesting power connectors.  And of course, the fan was just sitting there on the bench saying “pick me – pick me”  for the propulsion.

Ford came together nicely from an initial ides when I first saw the 3 wheeled skate. The lantern on the front is from a Miners’ headlamp.  The boiler is a spice tin topped off with a radio tube and mini light meter for pressure gauge.  The seat and steering are from an erector set. And the rear propulsion are the guts and fan from a rotating fan.  His hair is from an old leather tassel (no idea what it was used for, but it is cool) and I gave him his own goggles.  His head is a really hard to find small tin that someone had used to store cotter pins.

Dad Time was built around idea that Bots doing things with things really brings to life using inventory in hand.

In this case I wanted a Bot mowing a lawn.  I imagined someone taking a picture of Dad as he mowed the lawn.  Dads are cool and mowing the lawn is really fun to watch right?  The Dad Bot body is made from a round tin that had a graduated top that made a great shoulder to neck transition.  His head is a spice tin. The eye sockets are piping forms with hand blown glass doll eyes.  Oiler on top and an old key for a nose.  The Schwinn plate came from the treasure drawer and needed a little coaxing to bend to the shape of the tin.

Dad Time’s mower makes it all come together.  The bottom of a respirator tin is the body of the mower.  A smaller tin makes up the motor engine block.  Watch parts and gears make up the fly wheel assembly and carborator.  A metal 35mm film canister (ask your parents) is the gas tank.  I wired up a fuel line and throttle and gave him some controls.  The wheels are from a bag of old pulley wheels that had the right proportion to match that of the push mowers.  The final Bot actually stands on an aluminum circle as the original erector set box took up too much table top space.